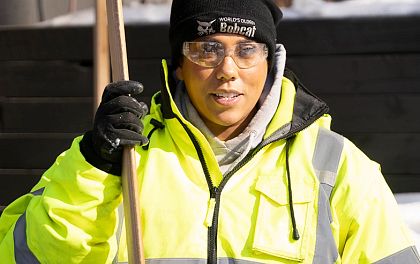 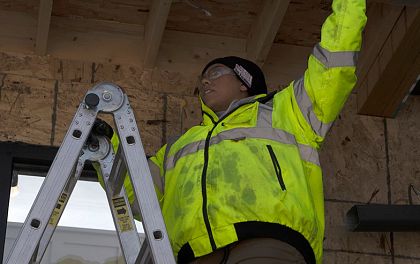 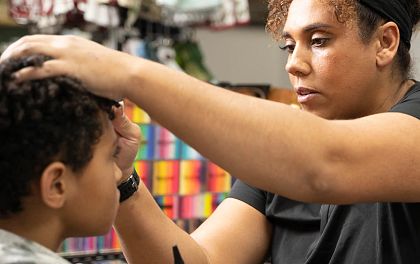 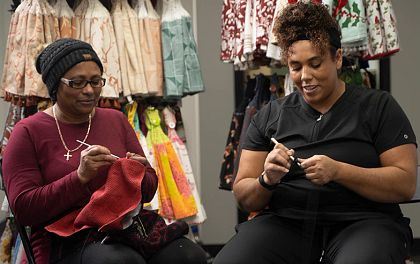 CUTTING A PATH FOR WOMEN IN CONSTRUCTION

In honor of Women in Construction Week Irish Setter visits with Andrea Race, a member of LIUNA Local #563, who has been working in the construction and landscape industries for 20 years – a true pioneer who serves as a role model for other women who aspire to careers in construction.

Becker, Minnesota – After the blueprints have been approved and the ground-breaking ceremony has been held, the work has to get done.

Someone has to pull on their boots, put on their hardhat and get down to the job of building it, whether it's a retaining wall at a local elementary school or preparing for the concrete pilings to be poured at what will eventually become the new home of the Minnesota Vikings. It's about showing up at 6:30 a.m. and being ready to go at 7 a.m. Measure this. Haul that. Move the rebar. Make sure that row of block is level. Get it done.

So that's why when Andrea Race shows up on the job site, ready to get to work, what you see is a person demonstrating undeniable grit, determination, and ability to dig in and give her all to every single project.

As one of the first women to join Local 563 nearly 10 years ago, Race, a construction laborer, serves as a jack-of-all-trades, so to speak, readying a site for the day's work ahead. While she has worked on dozens of construction sites over the years, she's left her fingerprints on some of the most significant buildings in the Minneapolis-St. Paul area, including the Union Depot, Target Center (where the Minnesota Timberwolves and the Minnesota Lynx play), and US Bank Stadium, home of the Minnesota Vikings.

"It is so rewarding to go to events at the places I've built and think, 'I laid all those pavers. I'm literally standing on all of the hard work I did to make this building exist,'" said Race.

Building from the Ground Up

In her current position, Race is in charge of "big block," meaning she personally bases out large concrete blocks, makes sure everything is flat and level, and then builds up the wall, level by level, using those blocks. These stone or concrete blocks range in size from smaller blocks that maybe weigh 100 lbs. or so, to large blocks that weigh thousands of pounds each. Over the course of her career, she's done just about every type of job that a construction crew expects of their laborers.

"For the Vikings Stadium, I was in charge of preparing to pour the concrete pilings that would hold up all of the decks throughout the stadium," said Race. "It's hard work, on top of which you could be battling freezing temperatures, wind or even snow or rain."

Despite the tough working conditions that Race often finds herself working in, her passion for construction is second only to the pride she has for the work ethic she brings to the job each day.

"I just love my job," said Race. "I could never see myself at an office job, where you're sitting there all day and not moving. I love the creative problem-solving aspect of construction and think building things is fun and rewarding."

And while she would probably be the last person to put herself on a pedestal representing women working in construction, she does understand the importance for women entering construction to see a successful woman with 20 years of experience under her belt as a construction laborer.

"I would definitely encourage other women to get into construction," said Race. "It's a good-paying job, you get to be active, and it's fun. While I feel that women have to work harder than men to prove themselves, I am confident that people will start noticing that we are hard workers. I'm sure things will change, even though it is going to be a battle."

Race is no stranger to hard work. Born in Jamaica, Race moved to Minnesota when she was four years old. Race recalls starting her first job as young as nine-years-old -- trimming trees and stacking wood in the cold for her father's tree service business.

"My dad taught us to work really hard from a young age, so it's always come natural to me to stay busy and keep pushing," said Race, who recalls her dad teaching her how to change a tire when she was 12 years old. "It absolutely helps when you're raised to think the way a construction worker thinks, so you really know how to dig into the work and get things done."

Even when she wasn't working, Race spent her childhood free time building skills that she would use for the rest of her life, such as crafting and building tree houses.

"We lived in the country, so one day I tried to dig a swimming pool in the backyard. When I got three feet down, I realized, 'Okay, this is going to be a lot harder than I thought,' laughed Race. "I would also always make tree houses and work on those kinds of projects."

The Artistry of a True Craftswoman

Race's spirit for hard work and creation has persevered into adulthood. A true non-stop creative, Race's work doesn't end between December and March when Minnesota's construction industry slows down for winter. During her "time off," Race can be found remodeling houses with her cousin; running a beauty business that specializes in body contouring, teeth whitening and eyelash extensions; offering face painting at community events; and sewing and crocheting reusable water balloons, scrunchies, and loofas, to sell at flea markets with her mom on the weekends during the spring, summer and fall.

In an endeavor to become a life-long learner, every single year Race takes a new class at a local college. This year, she started a business class.

"My mom and I are always sewing or crocheting, and my hands are constantly moving," said Race, who has a degree in Interior Design from the University of Wisconsin-Stout. "I've been doing this work for so long because I'm a hands-on, all-in person. I never have a weekend off, but I wouldn't want it any other way." 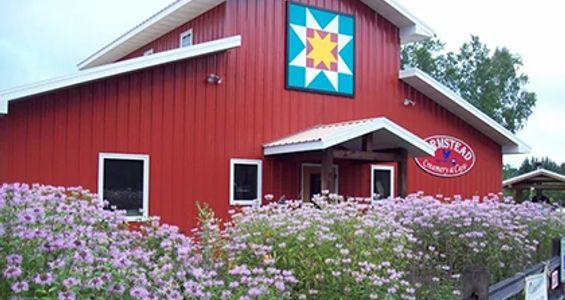 Rebuilding the Earth with Regenerative Farming

Lessons on regenerative agriculture, the next level of sustainability from North Star Homestead Farm